One of the big claims made by Telerik with the 7.1 release of Sitefinity was the big boost in performance. To quote them directly, it is "WAAAY Faster than Before!"  As developers, having done Sitefinity customization since the 3.x days, there is much to rejoice about with these claims, foremost is the fact that they are true! This is our observational Sitefinity Review while working with 7.1.

It's hard to believe that it has been over 3 and half years since Telerik released Sitefinity 4.0, a major divergence from the 3.x flavor.   Many things were better, and more user friendly, but one area that seemed to take a slide backwards was overall performance; this was especially true when working in the back-end as a developer, administrator, or even just adding content to pages.

Over the past 3 years Telerik has steadily been improving performance post spin-up. By 5.4 or so it was no longer a chore to work in the back-end of the CMS. Daily updates, posting blogs, adding images and files was about as enjoyable as such functions could be.  However, there were still complains about that initial spin-up time.

Now, to be fair to Telerik, this was not just a Sitefinity issue, but was somewhat a product of running on an ASP.NET platform.  Loading the website into memory, just-in-time compilation, and all of those Sitefinity services initializing took time. For a live website there were (and still are!) many tricks to keep the website 'warm', and thus sparing the public from this 'warm up time'.  However for the developer, going through many iterations of implementation, run time testing, debugging, the minutes added up.

With Sitefinity 7.1, though, we have found that Sitefinity truly has optimized performance; load times in most cases really are significantly shorter. As mentioned above, there are many processes occurring at start-up, and depending on the nature of your site the performance increase will vary, but we bet you notice it.  As developers, we certainly couldn't be happier.

If you are into numbers, take a look for yourself at what Telerik has published; just be sure to put on your seat belt, because the site runs on Sitefinity 7.1 and it really is fast! 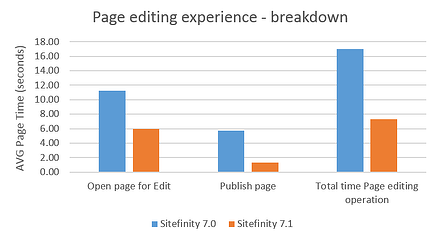 Want even more Data? Checkout the Sitefinity documentation on 7.1.